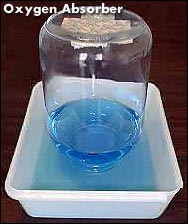 The following test was made with a D750 absorbers. Using the same idea as was used to check to see how much life is left in an absorber, it is possible to test to see how quickly an absorber will remove the oxygen from a chamber.

Tape an oxygen absorber to the bottom of a large bottle and set it upside down in a pan of water. Each day use a magic marker to mark the water level until the water level rises as far as it will go. A couple of days after the water level stops rising, take the bottle out of the water tray, put water in the bottle, put on the lid, and tip it upside down. Using trail and error, add and remove water until you get the level to the top mark. Pour it out and measure it. Repeat this process until you get a quantity measurement for each water level. Then figure the difference between each water level to see how much oxygen was absorbed between the different measurements.

Here's one example using a 500cc absorber in a one gallon bottle:

Doing a little plotting, had I checked it every 24 hours instead of the actual figures above, it would have looked something like this: 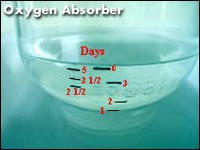 After the 6th day the water level in the above test went down slightly then fluctuated up and down following the barometric pressure reading. As you can see from the tables and graph, it takes a little time for the absorber to really get started, then it picks up speed, followed by a gradual decline as most of the oxygen becomes absorbed. Using the very crude techniques I used in this test, it was impossible to measure the gradual decrease in absorbing speed as it neared absorbing all the oxygen in the sphere. I presume, in theory, it would take an infinite amount of time to absorb every atom of oxygen in the sphere as the oxygen content in the inert gasses in the container drops further and further. Certainly after a couple of months, if enough absorbers were used, the oxygen content will drop down to the point that it's no longer measurable.

In foods, oxygen absorbers will not work as quickly as they will in an empty sphere as the air currents will move more slowly in containers full of food depending on the inner-connectivity of the air passages within the food. For example, even though there is more air mixed in with flour than around wheat kernels, it would take the oxygen absorbers much longer to remove the oxygen in the flour than the wheat as the air is locked in so much more tightly in flour than in wheat. I expect it would take at least a couple of weeks to remove most of the oxygen out of enclosed containers containing seed, and several times longer to remove the oxygen out of powders such as flour or mixes. 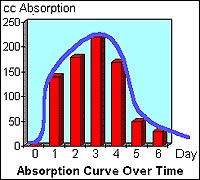 The long and short of it is, don't become alarmed if you check your mylar bags after a couple of hours, or even a couple of days and the bag isn't pulling in against the food showing a partial vacuum. Give it a couple of weeks and the bag will pull in as long as you don't have a pin-hole somewhere! Also, remember that air is only 21% oxygen and the oxygen absorber will not absorb the other gasses. So no matter what, you aren't going to get a true 'vacuum packed' look to your bags as air is 78% nitrogen and 1% argon, both inert gasses, which will remain inside the bag. I suppose it's even possible if you didn't do a very good job of pulling the bag around the food, removing as much air as possible, before you ironed your bag shut, that you may never get that vacuum packed look even if all of the oxygen has been removed by the absorbers.

Packing Your Food with Oxygen Absorbers

Why Use Mylar Bags in Food Storage

How Much Food Fits in a Container

Properly Storing Then Opening Your Food

Checking the Capacity of Oxygen Absorbers