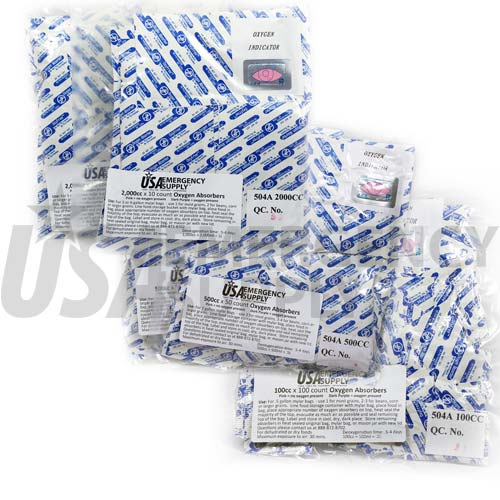 Within the last ten years the advent of oxygen absorbers has brought a revolution to the food storage industry. Their use has increased the storage life of foods and has made the job of putting away food for long term storage much simpler. There are two types of oxygen absorbers used for the storage of Food, "B" absorbers and "D" absorbers. The "B" absorbers require moisture from the food they are packed with to perform their action. A good example would be beef jerky or dehydrated fruit that hasn't been dried until it is brittle. The "D" absorbers contain their own moisture and are better suited for dry pack canning because there isn't enough moisture in correctly dried food to activate the "D" absorbers. Please note that all of the oxygen absorbers we sell are the "D" type and are suitable for dried or dehydrated goods. The "B" absorbers will last over a year after they are manufactured but the "D" absorbers traditionally only lasted 6 months. However, recent advancements have shown to improve this to a year if stored properly. This is important for you to know so you won't buy a bunch of absorbers, pack them away for two years, and expect them to do their thing when you finally open them. The "B" absorbers also work much slower as they must first absorb moisture from the food they are packed in before they will absorb any oxygen. You can generally leave them out for 2 hours before they reach their advertised minimum absorbing capacity. Because the "D" absorbers have their own moisture built into them, they start absorbing oxygen immediately when opened and reach their advertised minimum much quicker, generally within 20-30 minutes.

Number of oxygen absorbers needed: We sell oxygen absorbers in a range of 100cc to 2000cc. A #10 can holds 13 cups or very roughly 3300cc. Air is 21% oxygen. So that empty 3300cc #10 can actually has about 683cc of oxygen in it. If you take a full cup of beans it takes about 0.375 cups of water to bring the water level up to the top of the cup. I've found this to be true with most of the whole seeds I've measured including wheat and rice. This figure is important because it also tells you how much air is in the can when it is full of seeds - 37.5%. With a #10 can full of these products, you now have about 256cc of oxygen left in the can. If you are canning a powder you probably have less air than this but foods like macaroni would have more. Already you can see that one 750cc absorber should do the job nicely, in fact it's a bit of overkill. A 300cc absorber would also do the trick. We use one 500cc absorber in each of our #10 cans as we'd rather have a bit of overkill than a little oxygen left in the can should the absorber become loaded. Actually, on the cans, this is a lot of overkill as the absorbers we use now actually have more than twice as much oxygen absorbing capacity as what they are rated for.

A 6 gal bucket holds 22,740cc. Going through the above calculations, a full 6 gal bucket of grain or beans has about 1791cc oxygen left in the container at sea level. You will need four of our absorbers if you are packing up your food at lower elevations. Our facility is at 6,000 feet and at this altitude there is only an equivalent of 1484 cc of oxygen in the thinner air. Again, because of the oxygen absorber's significant under rating, we use four 500cc absorbers in the buckets and they will absorb more than twice their rated capacity.

Oxygen absorbers are over rated to give you a fudge factor if you should leave them out in the air too long. Generally, you have about 20 minutes before they reach this advertised minimum. There are variables that determine how fast the oxygen absorbers work, so you shouldn't leave them out any longer than you absolutely have to. But why not get every bit of absorption you can out of them? May I suggest you leave only enough out in the air to take care of maybe 1 or 2 minutes of operation? See our Packaging Your Food Using Oxygen Absorbers page for lots of other useful information about the actual packing operation using buckets.

Packing Your Food with Oxygen Absorbers

Why Use Mylar Bags in Food Storage

How Much Food Fits in a Container

Properly Storing Then Opening Your Food

Checking the Capacity of Oxygen Absorbers