Site Announcements
Our mylar bags are metalized BOTH SIDES.. bags with one see-thru window side will not work! Dear HOTMAIL.com email users, for unknown reasons HOTMAIL deletes our auto-generated emails. YAHOO email sometimes as well. Kindly use another email domain if you want membership confirmation, order confirmation, or a tracking number (eg: gmail.com, etc). See black banner on website for all items shipping flat-rate of $4.99! Volume bag case discounts are realized by updating quantities in View Cart. Lots of thin-ply masquerading as full thickness, lower-quality, double-fold shipped bags out there..don't be fooled! Our bags are high-quality, full-ply thickness (each side), heat sealed to themselves won't melt to your hot iron goodness, custom wrapped, and never shipped double folded! How may we help serve your home food storage needs in these troubled times? Preparation brings real safety and peace, empower yourself!
Search Site
Contact Us
Your Cart
Sales and support call 503.660.8312
Site Announcements
Select Items Ship Anywhere in the Continental US for only $4.99!!! Click for More Information 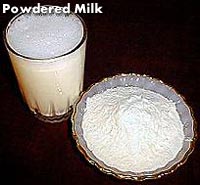 The powdered milk we sell is non-fat milk, or skim milk and only offer this type because of it's long storing qualities. If your family pretty much refuses to drink skim milk, there is a relatively easy way to add some fat back into your milk giving it a much closer taste to whole milk. Or, if you like, you can make 1% or 2% milk. Here is how you do it.

The Concept: Emulsify some vegetable oil then add it to your reconstituted milk. The word 'emulsify' means 'to suspend small globules of one liquid into a second liquid with which the first will not mix.' Two examples of this are the fat in regular milk and using soap to dissolve grease. In both cases, fat is broken up into millions of microscopic particles which are prevented from coming back together again by the emulsifying agent. Eggs are one of the best known food-safe emulsifying agents. In fact, mayonnaise is nothing more than a lot of oil and a very little bit of egg and vinegar that have been emulsified together. We are going to do the same thing. Caution should be taken not to use fresh, raw eggs because of the fear of Salmonella. Use powdered eggs instead. The manufacturers claim powdered eggs are Salmonella-free.

In a gravy shaker add milk then egg powder. Shake until well dissolved. Add vegetable oil and shake vigorously for 1 to 2 minutes. Your oil should now be in a fine emulsification. Add this to your 'Amount Milk Desired' and shake briefly.

Your oil will stay in suspension for a long time. However, much like cream in raw, unhomegenized milk, over time the fats in the milk will float to the top. The oil will be cream colored, though, and still emulsified with the egg. A quick shake of your milk jug will mix them back up for several hours.

I chose a gravy shaker in these instructions making this possible without electricity. However, under normal conditions, a blender will create a much finer emulsion. Mixed in a gravy shaker, it took about 2 hours for the emulsified fat to raise to the top of the container. It took 6-8 hours for the much more finely emulsified fat to rise in the container that had been processed in a blender. You will have better luck mixing the larger batches than smaller batches. This is because the egg powder and oil won't be so diluted in the milk, permitting the emulsion process to work better.

If you'd like to re-fat your powdered milk with real butterfat, you could also add a small amount of sweet cream to your reconstituted milk and shake it vigorously or quickly blend it. Over time, you can decrease the amount of fat you put in your milk and gradually wean them off the richer milk.